Mark your calendars, it’s time to celebrate the Ben and Jerry-est day of the year!
Since its first anniversary in 1979, Ben & Jerry’s has thrown open the scoop shop doors and invited everyone and anyone in for a free cup or cone of ice cream. This annual Ben & Jerry’s celebration is a way for the company to have some fun and say thank you to ice cream-loving fans for yet another year of support.

Last Thursday, we were invited to an exclusive Ice-Cream Party at the Ben & Jerry’s Dempsey Scoop Shop and we totally enjoyed ourselves. The awesome people from Ben & Jerry’s hosted us with so much fuzzy warmth and love that it was a night down memory lane for both Baby and I.

Here are photos of the exclusive Ice-Cream Party that we attended at the Ben & Jerry’s Dempsey Scoop Shop.

I would probably have went for Ben & Jerry’s Vintage Van.

They even have tee-shirts with fabulous designs too!

The rather extensive menu at Ben & Jerry’s Dempsey Scoop Shop.

During the Ice-Cream Party, there were games being played and in one of the games, participants were blind-folded and they have to guess the flavour of the Ben & Jerry’s Ice-Cream. Definitely not easy but certainly a doable task for a fan of Ben & Jerry’s!

Special appearance by the DJs from Power 98 FM.

Jeronimo performed a few numbers for all of us at Ben & Jerry’s Dempsey Scoop Shop.

A photo with Jeronimo.

I really love this song, “Firefly”, that Jeronimo performed at the Ice-Cream Party.

Our two favourite Ben & Jerry’s Ice-Cream flavours are Chunky Monkey and Triple Caramel Chunk. Of course, there are also other flavours such as the Maple Tree Hugger and the Peanut Butter Cup that we fancy a lot. 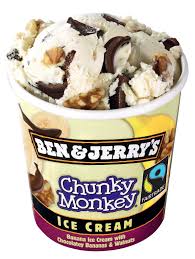 Well, we hope we ain’t making you salivate at this point in time but we are really happy to announce that we’re one of Ben & Jerry’s Moolets! Hence, if you’re a Ben & Jerry’s Fan like us, you will definitely be able to find out the latest news and insights that are happening at Ben & Jerry’s on our Blog!

This year’s line-up of funky flavours for Ben & Jerry’s Free Cone Day are Chocolate Therapy, English Toffee Crunch, Maple Tree Hugger, Strawberry Cheesecake and Lemonade Sorbet! If you’re wondering what’s the best flavour to have on Ben & Jerry’s Free Cone Day, we definitely would recommend Chocolate Therapy and if you just can’t get enough of it, all the major supermarkets in Singapore are currently having a promotion where you can stand a chance to win weekly lucky draw prizes by purchasing 2 pints of Ben & Jerry’s Ice-Cream [at least 1 have to be Chocolate Therapy flavour]. This promotion is ongoing from now till the end of April!

Apart from making your mouths and bellies happy on Ben & Jerry’s Free Cone Day, we also hope that you will join Ben & Jerry’s in doing some good for the community by raising funds for Project Happy Feet [Ben & Jerry’s fairness partner for Free Cone Day 2013]. Project Happy Feet is a Singapore-based not-for-profit organisation set up to empower the lives of underprivileged youths and children in Singapore and developing countries. It supports education-related initiatives and programmes through fund-raising that can positively impact them or their families.

To further aide Ben & Jerry’s in this cause, the CLEO editorial team will be adopting a Ben & Jerry’s scoop shop at VivoCity. The first 400 Ben & Jerry’s fans in line at the CLEO adopted scoop shop need not worry about the long queues as they will each receive a copy of CLEO’s April issue! To add fudge to your ice cream, CLEO will be throwing in a complimentary three-month digital subscription of CLEO magazine for the first 200 kind fans who donates more than $30 to Project Happy Feet. Now, that’s something to look forward to if you’re heading to Ben & Jerry’s VivoCity Scoop Shop on Ben & Jerry’s Free Cone Day!

With that being said, we have yet another piece of exciting news for all of you. For our Blog Giveaway this April, we are giving away 5X Ben & Jerry’s Ice-Cream Voucher which you can use to redeem a free scoop of Ben & Jerry’s Ice-Cream ONLY at Ben & Jerry’s VivoCity Scoop Shop. The voucher is valid till 15 October 2013; so you have about 6 months to utilise it if you win! So, to participate in our Blog Giveaway for the month of April, check out the following link: http://awinsomelife.org/current-blog-giveaway/

See you all at the Ben & Jerry’s Free Cone Day that will be taking place on 9 April, Tuesday!